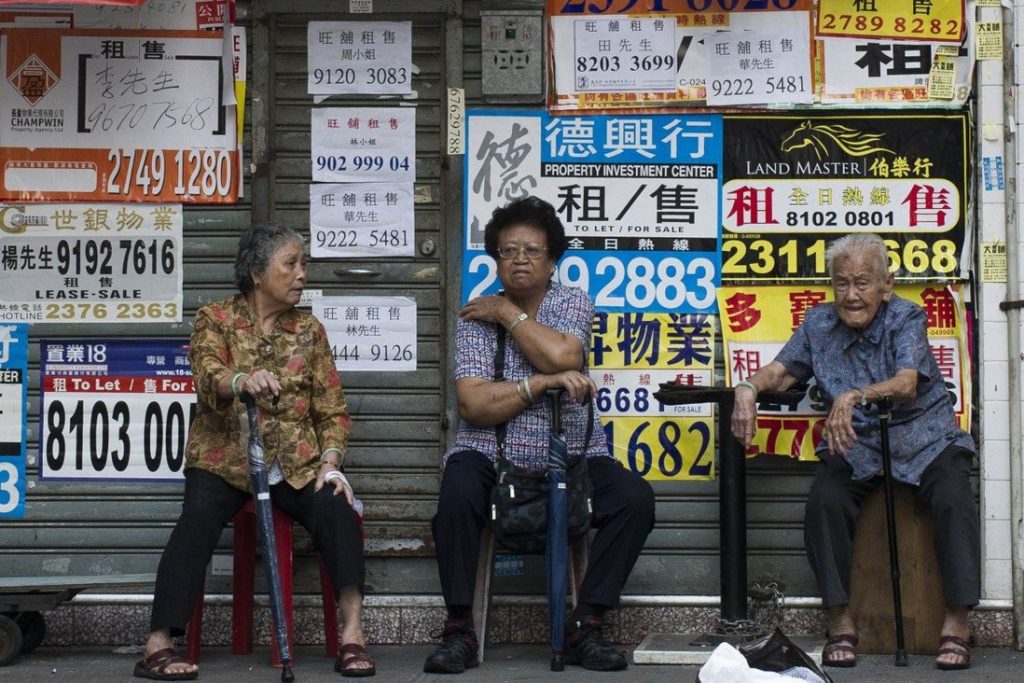 One in three people in the city is expected to be 65 years old or above by 2041, threatening to curb economic growth in the major financial hub. Photo: AFP

Schools replaced by care homes and a once-vibrant economy dulled by one of Asia’s oldest populations: experts fear this is the Hong Kong of the not-too-distant future.

One in three people in the city is expected to be 65 years old or above by 2041, threatening to curb economic growth in the major financial hub, the Hong Kong government has warned.

“It is a huge concern for our population development,” Hong Kong University social sciences professor Paul Yip said, explaining that the economy will take a hit if the ageing trend continues.

“There will be more people but less that are working, so fewer people will be contributing to the economy of Hong Kong,” Yip said.

While some critics argue that government forecasts for 2041 fail to make allowances for migration or those who will continue to work beyond the retirement age of 65, the territory faces clear challenges on an economic and social front.

The impending demographic problem is reflected in programmes such as Eldpathy, set up by Hong Kong University of Science and Technology students, which aims to foster more empathy towards the elderly by encouraging teenagers to try on special movement-restricting suits designed to simulate the sensation of age on the body.

“The plight of the ageing population in Hong Kong is getting more and more serious,” Eldpathy co-founder Samantha Kong said.

For others, the problem is not so much a high population of elderly but Hong Kong’s lack of children.

Financial pressure, career-driven mentalities, limited space and exorbitant property costs are seen as key drivers of a fertility rate that is one of the lowest in the world by some measure, with an average 1.20 births per woman according to the World Bank.

“Young people do want to get married, but they just cannot afford to rent a place to live,” Yip said.

They tend to stay with parents longer in the hope of saving enough money to buy a flat, meaning that they end up waiting longer before getting married and having children, he said.

Social trends in Hong Kong also indicate that an increasing number of women are choosing not to get married. Those who do tie the knot do so much later and have a very small time window to start families, he said.

Many married couples “would rather have a pet than a child”, added Yip.

Based on current fertility and mortality rates, if Hong Kong does not do anything about its ageing problem it will have a median age of 56.3 years by 2040, according to the United Nations.

Based on the same factors, Singapore will hit 50.3 years, China 45.9 years and Thailand 45.7 years, according to UN data.

Hong Kong’s semi-autonomy from China expires in 2047, and experts say it is not clear how this will affect its demographic make up.

The former British colony was returned to China in 1997 with its own political and legal system that guarantees civil liberties not seen on the mainland, until 2047.

Hong Kong chief secretary Carrie Lam, who heads a committee which in October started a four-month public consultation on the issue, said the city must broaden and diversify its workforce to tackle the challenge of ageing.

The committee has also considered attracting talent from overseas and mainland China, which has brought opposition from the city’s unions.

Allowing well-educated mainland Chinese parents to have children in Hong Kong has also been a suggestion to help reverse the demographic trend.

Up until the end of last year, thousands of mainland women came to give birth in the territory and gained residency rights for their children, but local families complained they were taking up limited hospital beds.

The city has since banned pregnant mainlanders whose husbands were not from Hong Kong from giving birth at local hospitals.

For some, the spectre of a city with a diminishing work force and lack of youthful dynamism is a very real worry.

“It wouldn’t really be a city I would like to live in,” says professor Yip.