Home/Altered images: photography as a tool for gender equality

Altered images: photography as a tool for gender equality

From domestic workers in Hong Kong to the children of sex workers in Lahore, 22-year-old Bonnie Chiu believes that cameras can empower girls and women 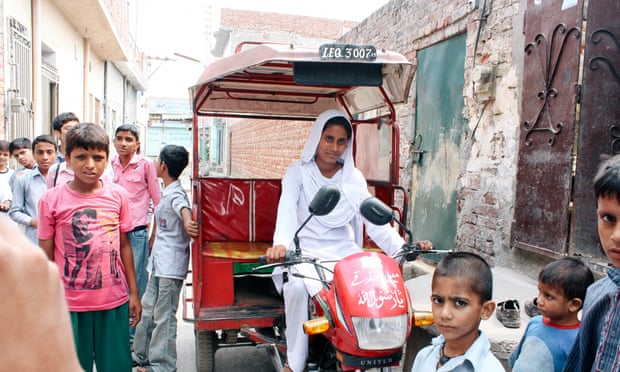 The photography workshop gave girls the chance to present themselves differently – such as driving a motorbike Photograph: Bonnie Chiu/Lensational

Three years ago I was travelling in Istanbul, snapping away with my Canon 600D, when four girls came up and asked if they could take a look at my camera. I started teaching them how to take pictures. Even though they did not speak much English, we connected over photography. I realised then that taking pictures is a universal language that transcends cultural boundaries.

I started thinking about whether photography could transcend other types of boundaries that hold girls back from achieving their potential. That led to me and an old classmate setting up Lensational, a social enterprise aiming to empower women and girls in the developing world by equipping them with cameras and photography training.

We started teaching photography to Filipino and Indonesian domestic helpers in Hong Kong. Jem, one of our Filipino domestic helpers, told us that learning to take photos helped her to overcome the loneliness of being far away from her family.

When thinking about where to go next, I looked at the World Economic Forum’s Global Gender Gap Report. Pakistan caught my eye. It bred heroines like Benazir Bhutto, the first woman elected to head a Muslim country, and Malala Yousafzai, who risked her life in the fight for access to education for girls. I was curious to find out if they have inspired their fellow Pakistani women and girls to fight for their own rights.

In the summer of 2013 I started an internship at Pakistan’s Citizens’ Commission for Human Development (CCHD) in Lahore, which was organised by Aiesec, a global NGO that provides young people with cross-cultural internships. On the first day I pitched Lensational to my boss, Farrah Azeem Khan, an inspirational leader who worked closely with Benazir Bhutto. She liked the idea, especially how it could help women and girls discover their inner selves. She helped me arrange workshops and assigned two interns to my photography workshops to help with translation. I had brought 12 disposable cameras with me from Hong Kong, donated by an NGO called The PhotoCrafters.

I adapted my workshop content to the needs of men and boys, with more technical details around ISO, lighting and flash. I had to overcome my own self-consciousness of speaking in front of 30 18-year-old male students and realised that the art form is a neutral entry point to engage men and boys. The desire to capture memories, thoughts and emotions through photography is universal, regardless of income and gender.

Our photography workshops focus not only on the technicalities of operating cameras, but also on how the participants can express their thoughts and feelings through the press of the shutter. I encouraged them to share their aspirations for the future with each other. We ran workshops with students and teachers at non-formal schools, children in the slums and the children of sex workers in Lahore’s red light district.

Following a successful crowdfunding campaign, we will return to Pakistan in April 2015 to equip the previous participants with their own cameras. The workshops provide them with the medium to express themselves despite illiteracy. With their own cameras they also have the possibility of earning extra income through selling photographs. Part of the Lensastional model is to sell pictures taken through the workshops. In 2015, I hope that Lensational will help workshop participants earn extra income either through selling pictures in the developed world, or finding freelance photography opportunities locally.

Photography is a powerful agent of social change. During one of our workshops in Pakistan, we were taking pictures near a motorbike. Some boys rushed to pose on it, but not one girl moved forward. One of the girls eventually raised her hand with courage. She jumped on the motorbike, probably the first time in her life. This is a country where women and girls are not seen driving motorbikes. Her eyes were sparkling. I named this photograph ‘Courage to Drive’. The press of shutter created an image to challenge the definition of women and girls in this society. Men and boys may show skepticism in the beginning, as the faces in this photograph suggest, but as they see new images of girls and women they may change their minds. We hope that other girls we engage through Lensational can be as brave as this girl.